Explains all the steps required to install Bower and manage dependent packages.

How To Install Bower And Manage Dependencies
April 05, 2019

This tutorial explains all the steps required to install Bower and manage dependent packages on Windows system for front-end based project development. The steps should be the same on Linux based systems. Using Yarn and Webpack or Parcel is the recommended solution to manage dependencies for all the front-end based projects since bower is marked as deprecated. We might still need bower in several cases.

In order to use bower, we need to define the packages in the manifest file bower.json in JSON format. After defining the packages, we can install the dependent packages.

We need Node.js already installed on the system before starting with Bower installation. You can follow How To Install Node.js On Windows to install Node.js on Windows system. After confirming that Node.js is installed, run the below-mentioned command to install bower globally.

It will show NPM warning as shown in Fig 1.

The messages are as shown in Fig 2. 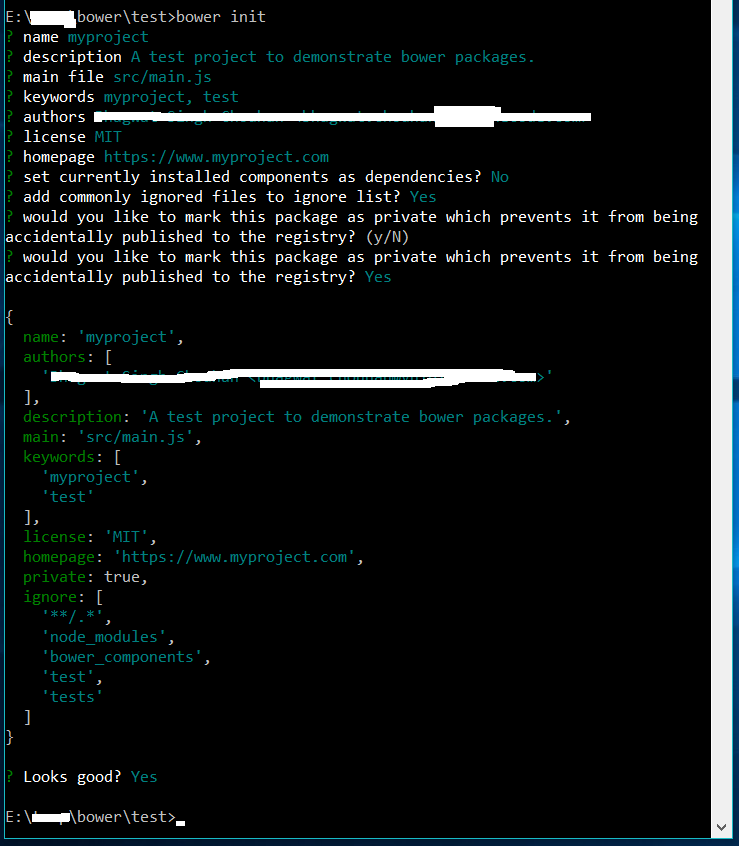 It will create the default manifest file as shown below.

After creating the manifest file, we can install the packages required for the project. You can specify the directory to install bower components in the bower.json file as shown below.

The packages can be installed either for production usage or for development purpose as shown below.

The above-mentioned commands can be used to install the package with the option --save or --save-dev. Below mentioned are examples to install bower packages.

The package file looks like the one as shown below. Note that our installed packages are added to dependencies and devDependencies.

We can remove the pre-installed bower packages using the below-mentioned commands.

The example commands to remove packages are as shown below.

These commands also update the bower.json file and remove the package dependencies from it.

We can also distribute and publish our project as a bower package (or component) so that others can install it as a package similar to how we are using the packages published by others.

In order to do so, first, publish the project to GitHub as a public repository and add a tag specifying the initial version following semver guidelines. The package must be publicly available at a GitHub endpoint. We can also use other Git version control service. Add the bower_components directory to the gitignore list.

Now register your package to bower using the below-mentioned command.

Now anyone can install the registered package by running the below mentioned command.

Similar to public packages, we can also use Bower and GitHub Enterprise for private packages visible only to an authorized person.

We can remove the registered package by using the below-mentioned command. We need the same Git account used to register the package in order to remove the package.

These are the basic activities involved in managing the dependencies of a front-end project using bower dependency management.